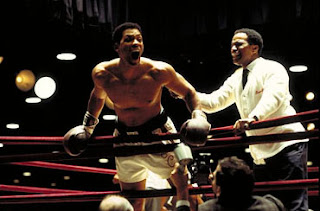 Ali is a 2001 biographical film directed by Michael Mann. Mann is known for directing great pictures like The Last of the Mohicans in 1992, Collateral in 2004 and many more. Ali tells the story of Muhammad Ali aka Cassius Clay, the icon of heavyweight boxing. In the role of Ali we can see the talented Will Smith. And let me tell you up front, Will Smith was just incredible in this role. In fact, both, Will Smith and Michael Mann, were so dedicated to make this film as good as possible that they offered to put up their salaries in case the film went over-budget.
So, this magnificent film takes us all the way back to 1964 when fresh from his Olympic gold medal victory, a brash new pro boxer, Cassius Clay, explodes onto the scene of heavyweight boxing and follows his career as professional boxer, personal life and problems with the law as he refuses to submit to military conscription for duty in Vietnam for 10 years. I'm not going to bother with a retell. It would be too long for anyone to read. I'll just write about the aspects I found remarkable.
Well, what is definitely worth mentioning is that there are no rocky-type fights. This film is not made to entertain people, it's made to show the life of a great man and that as realistically as possible. In my opinion, they have succeeded at that. Although, I'm not an expert on Ali Muhammads biography, I have only seen few documentaries on his life and video recordings of some of his fights, it seems to me that the matches in the movie are close to perfect reproductions of the real ones. Michael Mann really has focused on getting all the details right.
According to Wikipedia, Ali has won 20 awards. Well, that should be enough of a back up for my rather praising review. Unfortunately, Ali, despite of being nominated in two categories in Academy Awards and in three categories in Golden Globe Awards, didn't win any Oscars or Golden Globes. To me that just seems like a big misunderstanding. I can't recall that there was anything better made that year. Okay, A Beautiful Mind with Russell Crowe was a pretty decent film as well. But trust me, Ali is better.
The users of IMDB have given Ali a rather mediocre score of  6.6 points. I guess a lot of people just can't appreciate when something is made to tell the real story, instead of just being entertaining. Well, from me, this masterpiece get's 8 points out of 10!
Posted by psychology-knowledge at 2:32 PM